Showing posts from July, 2017
Show all

How to make boot entry in CentOS for Windows 10 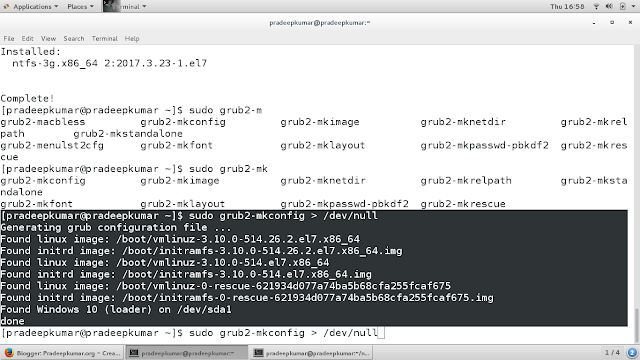 Whenever you try installing Cent OS, after the installation of CentOS, the windows 10  or windows 8 might have gone missing from the boot table entry. This is due to one of the reasons Since Windows 10 or 8 runs with NTFS filesystem which could not be understandable by Cent OS any other booting issues like UEFI or GPT partition issues. Any how, one can try the first method to get rid of the NTFS filesystem issue. After installing CEntOS, get it in to the Cent OS and open the terminal and give the command one by one $] sudo yum install epel-release or $] sudo yum install epel-release.noarch $] sudo yum install ntfs-3g Depending on the speed of the internet, the above command might take some time to install. $] sudo grub2-mkconfig > /dev/null this command will read the windows 10 or 8 partition. Thats it. Reboot the machine and you can boot in to Windows 10. Here is the image   and final step is here, execute these commands $] sudo grub2-mkconfig -o /boot/grub2/grub.cfg If EFI Mode is
Post a Comment
Read more
More posts