Dr. Richard Stallman, the man behind the Free Software Foundation has visited IIT Madras on 6th February 2012. He gave a Lecture on “Free Software, Freedom and Education”. A 3 hour non stop talk at this age is really surprising for the listeners. 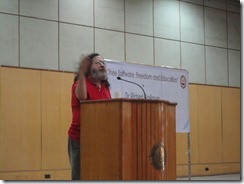 Over all the above, the seminar and the talk was successful. Dr. Richard Stallman should make his visit to India frequently to motivate Indians particularly students.