Showing posts from December, 2011
Show all

How to create an Agent in NS2 (Network Simulator 2) 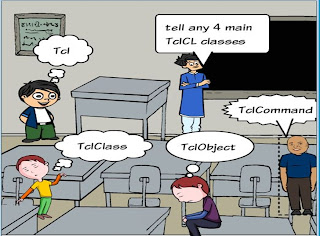 Adding a new agent in NS2 uses C++ to be coded. Unlike conventional C++, NS2 uses TclCL and OTCL. There are 6 TclCL classes that are needed to develop any module in NS2. Tcl TclClass EmbeddedTcl TclObject TclCommand A new module in NS2 (an agent, a packet, a queue) can be created using the above classes. for creating a simple agent, refer the post given below http://www.nsnam.com/2011/12/creating-new-agent-in-network-simulator.html Pradeep Kumar TS
1 comment
Read more

- December 18, 2011
Turbo C Compiler is the best compiler so far until we are comfortable with Windows XP. After the Launch of Windows 7, the TC editor is not that much user friendly (as maximisation of DOS Window is hectic) and that too Turbo C was not scalable for 64 bit Windows 7. But there are some c compiler tools that are quite comfortable to use with (32 bit as well 64 bit OS). Have a look at the following Links There’s a tools Bloodshed Dev-Cpp which works under the gcc and Mingw is suitable for windows 7 64 bit OS. Also, if you have Microsoft visual C++, then it’s a good choice to run under windows 7 64bit. So here are the various C compilers for 64bit windows 7 OS Bloodshed Dev-Cpp Microsoft Visual Studio (64bit) and Visual Studio Express. Netbeans 6.9 with Mingw and GCC compiler (here you should have the jdk for 64bit OS) Eclipse with gcc and mingw (again, the jdk as well eclipse should be of 64bit) C- Free Professional Code Lite - CodeLite is an open-source, cross platform IDE for the C/C++ pr
Post a Comment
Read more
More posts