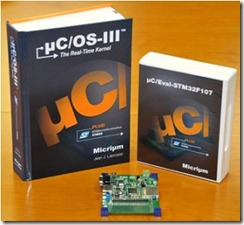 After the introduction of Micriµm's µC/OS-III earlier this year, the biggest question on many engineers' minds was, "Will there be a book?"  Undoubtedly, these engineers were hoping for a follow-up to the highly popular MicroC/OS-II, The Real-Time Kernel.  One of the all-time best sellers in the embedded field, this text has long been recognized not just as the definitive guide to µC/OS-III's vaunted predecessor (µC/OS-II), but as a first-rate introduction to kernels in general.  The thousands of embedded systems developers who use µC/OS-II embrace the book as a welcome departure from the confusing users' manuals that accompany most software vendors' kernels.

With the official release yesterday of µC/OS-III, The Real-Time Kernel, the embedded community no longer has to wonder whether there will be a similar book for Micriµm's newest software component.  Developers seeking to better understand µC/OS-III can now turn to a thorough, well-written text that may be even more helpful than the µC/OS-II book.  µC/OS-III, The Real-Time Kernel, which, like its forerunner, was written by Micriµm president Jean Labrosse, is divided into two parts: The first half of the book offers detailed descriptions of µC/OS-III's services, while the second half outlines several example applications that target the STMicroelectronics STM32 family of microcontrollers.  Conveniently, an evaluation board incorporating one of these devices is provided with the book, allowing readers to immediately begin running the example code.