Linux supports many number of file systems, that’s why Linux is accepted quickly as one of the best Operating systems.

Linux has the unified interface called as Virtual File system (VFS) which serves as the interface defined in between the OS kernel and the different file systems as illustrated below. 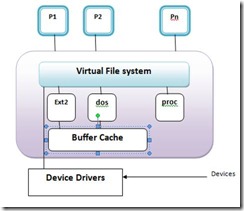 The UNIX file system passes through various processes like

o Contains the inode structure for the files

o The data blocks contains ordinary files along with the directory entries and the indirect blocks.

In Unix, the separate file systems are not accessed via device identifiers as is the case for other operating systems, but are combined in a hierarchical tree.