Showing posts from February, 2009
Show all

Blocks and Procedures in ADA

- February 28, 2009
Blocks A Block in ADA contains two parts specification and a body. The specification specifies the variable used inside the block and the body executes the statement for the block syntax block begin --- --- end The main purpose of blocks are information hiding. A Variable declared inside a block is accessible only within the block and nowhere outside the block. Example var x,y:integer begin    y:=0;  for x in 1..10 loop   block    var x:integer;     begin      for x in 1..5 loop     y:=y+x;    end loop; end; end loop; (NB: the above example shows two variables x within the block and outside the block, The x inside the block is accessible only within that block) Procedures and Functions Blocks are repeated whenever they are needed, but functions can be written once, called anytimes Examples //to define a function to show the smaller among two integers function SMALLER (A,B: integer) return integer is  begin if A < B then   return A; else return B; end if; end SMALLER; //functi
Post a Comment
Read more

- February 10, 2009
What is a strongly typed language? Each variable must be declared with its own data type each data type should be associated with a value and operation (which operates on those values) implicit type conversions are not allowed explicit type conversions are legal. for example, if i is integer and a is float, then i=a; says it is implicit which is illegal, if i=(integer)a; then it is perfectly legal.
Post a Comment
Read more

- February 10, 2009
Myopic Offline Scheduling is a multiprocessor Scheduling Algorithm This algorithm is meant for non preemptive tasks Since it is an offline scheduling algorithm, release time, deadline and execution time are known apriori. It proceeds like building up a schedule tree Every level should be checked for feasibility. If not strongly feasible, then backtrack. If strongly feasible, then proceeds the next level until all the tasks are scheduled. Heuristics are based on Deadline (Di) Earliest Start Time Laxity (Di-ei) weighted sum of any of the above For example if the heuristics H(i) = Di, then the schedule is carried out based on the tasks with earlier deadline
2 comments
Read more

The feasible interval (release Time and Deadline) of each task in the precedence graph is given next to its name. The execution time for T1,T2....T7 is respectively 2, 2, 3, 1, 1, 1, 3. The priority is in the following order, T1>T2>T3...>T7 ( T1 being the highest priority and T7 being the Lowest Priority) a) What is the minimum number of processors required for feasibility? Answer Single Processor At time 0, T2 and T6 are ready, Since T2 is an independant task it can scheduled. At time 1, T2 is running and T3,T5 and T6 are ready (but all are dependant tasks) At time 2, T2 completes, T1, T3,T5 and T6 are ready (T1 is starting because of high priority) At time 3, T1 is running, At time 4, T1 completes, T3, T4, T5 and T6 are ready.. Here T3 is ready to execute because of high priority and as well it satisfies the precedence constraint. At time 6, T7 is also ready along with T4, T5 and T6. Except T5 all the tasks meets their deadlines. So, having one processor is not a feasible s
Post a Comment
Read more 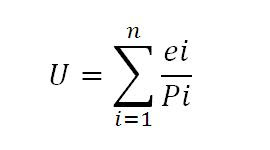 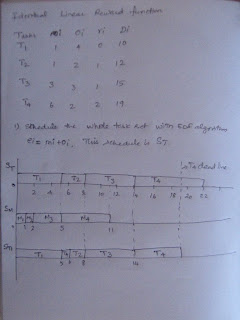 IRIS means Increased Reward with Increased Service, If a task runs to its completion, it get full reward. if not run to its completion then it gets zero reward.  So, Each IRIS tasks has two portions a Mandatory part and an Optional Part.  If a tasks completes atleast its mandatory part, then it gets a little reward, but if a tasks does not complete even the mandatory part, then it will get zero reward from it. so the reward function is given below, mathematically, Where Ri(x) is the reward function, oi being the optional part and mi being the mandatory part....  Each task has Mi={M0.....Mn} Mandatory portions and Oi={O0...On} Optional portions so, the execution time of the task is the sum of mandatory portion and optional portion. ei=mi+oi The schedule is like this, Step1; First try to schedule the task set using EDF as a whole with execution time, deadline and release time, if the task set is schedulable, the that is the feasible schedule.STOP. If not feasible, go to Step2; Step2: Sch
Post a Comment
Read more