Example for all the above models is given below

· The above figure shows the Directed Graph which includes two instructions X and Y which belongs to Processor A (PA) and processor B (PB) respectively.
· The outputs from X are (a, b, c) and two of its outputs are sent to Y as inputs. There are two other inputs i, j are sent to Y. so the total inputs to Y is 4. This is indicated by a circle with 4 as the number of inputs. So this graph is said to be SDFG.
· To convert this in to HSDFG, there should be only one token at the input and output. 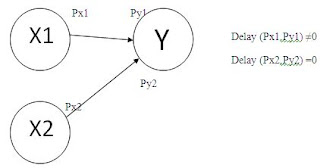 · In the above figure, there are two inputs to Y and it is being separated as one input, one from X1 and another from X2. (X1 & Y) makes one HSDFG and (X2 & Y) makes another HSDFG.
· APEG is obtained from removing the delay elements from an HSDFG. In the above figure there is no delay element between (X2 and Y), but there is a delay between (X1 and Y).
· So the following figure is APEG