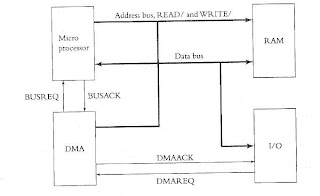 DMA is a circuit that can read data from an I/O Device and then write it into memory. In general, the IO Devices accessing the Memory with least bothering the processor.

The IO Devices request the DMAREQ and then the DMA Controller requests the BUSREQ from the processor. Once the processor gives back the BUSACK, the IO Device is ready to write to the memory or read from the memory. During the initiation of the BUSACK from the Processor, the Processor also places the Address on to which the data is to be written to the memory. Most of modern high end controllers or processors will be having the DMA controller in built in it.
Embedded Systems EmbeddedSystems